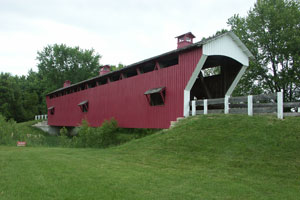 Includes 1004 locations in the following areas:

These bridges are from across the United States and Canada.

This file contains American and Canadian covered bridges listed in the World Guide to Covered Bridges published by the National Society for the Preservation of Covered Bridges. They are primarily bridges that presently carry or formerly carried highway traffic. (It doesn't contain other covered bridges used primarily for decoration on private property, golf courses, etc.)

The file lists the covered bridge name, river crossed, year built and World Guide Number as assigned by the Society.

You can learn more about National Society for the Preservation of Covered Bridges at this page: http://www.coveredbridgesociety.org/

END_OF_DOCUMENT_TOKEN_TO_BE_REPLACED

There are currently 7 users and 35 guests online.