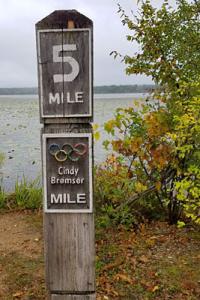 Includes 8 locations in the following area:

This is a 10K cross country loop around Lake Wingra in Madison and particularly UW-Madison's Arboretum and Madison, Wisconsin's Vilas Park. It was dedicated in 1997 to Bill Niederberger of the Wisconsin Track Club.

Along this course, there are mileposts with the mile number and Olympic Rings.

Here's a link to describe these posts and if the link ever goes dead, I'll copy the appropriate text under the link:

The running trails at the UW Arboretum honor famed Wisconsin runners on each of the mileposts. The trail is a 10-kilometer (6.2 mile) loop, so there are six mile-marker posts, each bearing the name of an Olympic distance runner who lived in Madison. In order, they are:

The posts are a 21st century addition to the Arboretum, which is often used as training ground for the UW’s cross-country teams. And one thing you may notice is that none of the runners medaled at the Olympics — the mile posts are a lasting honor to those who competed at the highest levels, though they did not win.

*Also in the link, there is one comment: Is the Suzy Favor-Hamilton post still there? They redid the entrance to Wingra Park recently and I haven't seen it since. I agree with the comment that the Mile 1 post is missing but from the comment, the post's location appears to be at the entrance to Wingra Park along Monroe St so I have indicated a POI for this "missing post" location.

END_OF_DOCUMENT_TOKEN_TO_BE_REPLACED

There are currently 5 users and 70 guests online.