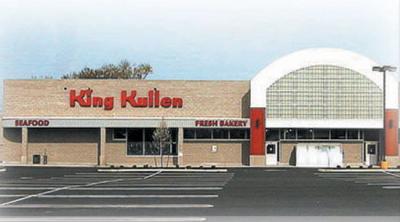 King Kullen, 2305 Jericho Turnpike, Garden City Park, NY, 11040
The above picture was submitted by camerabob from their web site

Includes 39 locations in the following areas:

About: Born of Irish immigrant parents in 1884, Michael J. Cullen learned about the grocery business during his early years of employment. At 18 he worked as a clerk for the Atlantic & Pacific (A&P) Co., moving on to general sales manager at Mutual Grocery and Kroger Stores. His natural marketing talents, work experience observations and insight in the grocery business led to his idea for mass merchandising - selling high volume at low profit margins. He wrote a letter to the president of Kroger, describing his ideas that would eventually revolutionize the industry, his letter went unanswered. Undaunted, and confident in his ability to see his idea become a reality, he quit his job and moved his family to Long Island. It was there that Cullen leased a vacant garage on Jamaica Avenue in Queens, just a few blocks from a busy shopping district, and on August 4th, 1930 opened the doors to America's first supermarket, King Kullen Grocery Company.

END_OF_DOCUMENT_TOKEN_TO_BE_REPLACED

There are currently 5 users and 35 guests online.