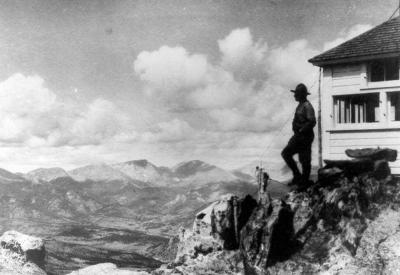 Includes 5577 locations in the following areas:

This file is a work in progress ,it combines about 5600 sites across the US. Some sources estimate 7000 sites known. This file may include towers and sites of all types. Such As steel towers, wood and log cabin towers, rock or cement structures .Pole towers crows nest towers and tree tower locations .Tents were common with earlier sites. Buses and trailers were also used. If the status of the site is known it is shown. Elevations EST, geocash, terracash if available are also shown. Access to some sites my be limited or not available. Roads and trails my no longer be visible. The file includes the NHLR sites staffed or standing ,abandoned, gone or destroyed sites. Most information comes from the forest fire lookout association.

The Forest Fire Lookout Association (FFLA), founded in 1990, is an organization involved in research of former forest fire lookout sites, ground cabins and early forest fire detection methods. Anecdotes of Lookout operators both past and present are documented. The organization encourages efforts of public groups and others in the restoration of forest fire lookouts. Some lookout projects are undertaken by chapters of the organization itself. The Forest Fire Lookout Association's by-laws prohibit the lobbying for retaining lookout operator jobs and there is no political connection to any such groups that encourage these efforts. The membership is composed of lookout enthusiasts, hikers, conservationists, forest fire personnel, foresters, story writers, and members of the environmental community. Conferences are held twice a year in the eastern and western United States and Canada. A Board of Directors meeting is held each January and state chapter meetings are held periodically. The Forest Fire Lookout Association issues a quarterly newsletter, Lookout Network and is a benefit of membership. A Plus membership is available which includes quarterly issues of National Woodlands Magazine which has articles and information on the National Historic Lookout Register and the FFLA. The Forest Fire Lookout Association has chapters in twenty-five states and are represented by directors. Correspondence is currently received by almost all fifty states. Chapters are also located in Western Australia and Canada..

END_OF_DOCUMENT_TOKEN_TO_BE_REPLACED

There are currently 4 users and 73 guests online.