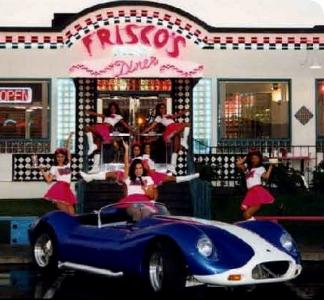 Includes 3 locations in the following area:

This Project was started by ScottK and continued by Mahoney on 07-01-09
Friscos® World Famous Carhop Restaurant and Bar with live entertainment...Frisco's Carhop Diner has been the dream of Takis Stathoulis, A Greek immigrant, vocalist, and his wife Joanne Frisco Stathoulis, a lifetime Downey resident. In 1982, they opened the first of their three restaurants creating a 1950's style diner, restoring the good old days of family dining. After years of hard work and dedication they have created a successful family business. Through Takis' and Joanne's unique and constant creative ideas, Frisco's and the "Carhops" have been world renowned and have attracted people and the media from here and abroad. They have been featured in several worldwide car magazines and newspapers, movies, commercials, music videos, TV shows, on all the major radio and television networks, cable programs, and overseas television documentaries. The "Carhops" have performed with many of the fabulous fifties performers, at fifties beach parties, various leading hotels, amusement parks, conventions, concerts, and car show events. Frisco's has the one of the largest weekly cruise nights in the nation with live concerts, featured entertainment, hundreds of custom cars and thousands of loyal cruise enthusiasts. But most of all…Frisco's is known for their fabulous food.

END_OF_DOCUMENT_TOKEN_TO_BE_REPLACED

There are currently 2 users and 58 guests online.