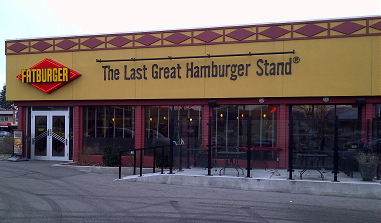 Fatburger, 1101 Harvey Avenue, Kelowna, BC, V1Y 6E8
The above picture was submitted by Juggernaut

Includes 112 locations in the following areas:

Fatburger seems to be increasing their footprint across the globe in late 2013-early 2014, so you'll have to excuse me if there are any missing locations in the file. As usual any corrections sent to me are welcome if you spot any errors in the file.

February 8, 2014: Refreshed the list from the contents of their web site.

About: In 1952, Lovie Yancey created the biggest, juiciest hamburgers anyone had ever seen. So obviously, there was only one name for them – Fatburger. Half a century later, while other places are just discovering taste, they're still making hamburgers the way she did. Fresh lean beef, not frozen patties. Cooked-to-order, just the way you want it, every time. The only thing Lovie loved as much as hamburgers was music, so you'll hear some of the best music ever blasting from kickin' new jukeboxes: Rock'n'Roll, R&B, Hip-Hop, and Classic Soul that'll keep you groovin' in your chair long enough to finish that big juicy burger. A few key Fatburger features: onion rings made from real onions. Hand-scooped, real ice cream shakes. Great tasting chili. And fries cooked in 100% cholesterol-free oil. All served with a smile. Fatburger: Distinctive seasonings and attitude since 1952.

END_OF_DOCUMENT_TOKEN_TO_BE_REPLACED

There are currently 1 user and 14 guests online.