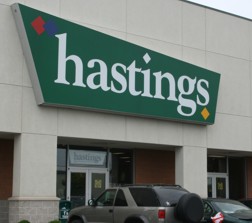 Includes 150 locations in the following areas:

[From Wikipedia:]
The company was founded in 1968 as a retailing division of Western Merchandisers, Inc., a books and music wholesaler. There are currently 153 stores in 21 states, predominantly based in smaller communities. Hastings Entertainment is headquartered in Amarillo, Texas.

END_OF_DOCUMENT_TOKEN_TO_BE_REPLACED

There are currently 12 users and 31 guests online.